In topic this term we are going to be doing some history; this means learning about people or events that happened in the past. We are going to learn about some real life superheroes who lived in the past and changed the way we live today. 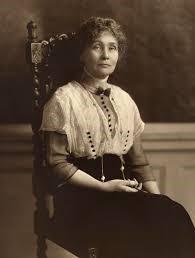 In the past, men and women were treated very differently. 100 years ago women could not do any of these things:

This sounds horrible doesn't it? Emmeline Pankhurst was furious about this and spent 40 years trying to change this. She was initially part of a group called the suffragist movement She wanted all women to be able to have the right to vote just like men. Emmeline soon formed her own society – the Women’s Social and Political Union (WSPU). Their motto was ‘Deeds Not Words‘ and they began using more aggressive tactics to get people to listen. This included breaking windows, handcuffing themselves to railings and going on hunger strikes.

Many protesting Suffragettes were arrested for law-breaking and many went to prison. In further protest, Suffragettes would go on hunger strike (stop eating) in prison.

World War 1 also drastically changed women’s roles. Before the war, a woman’s place had been in the home, cooking, washing, cleaning and raising her children. But when the war began, women were needed to lend a hand! Millions of men had been sent away to fight, leaving jobs that were essential to keeping the country running. Many women went to work for the first time in lots of different industries – even in dangerous jobs such as making weapons for the war.

After the war there was a breakthrough as the government realised what essential work women had done during the war and they let some women have the right to vote. It took ten more years and finally in 1928 women had the same right to vote as men.

Your mission today is to try and remember as many facts as you can about Emmeline Pankhurst,  why was she upset? What did she do about it?